Click Here for a stunning video on CGC History

Concord Golf Club has a long and distinguished history. It originated from The Sydney Golf Club.

With over 120 years of rich history, The Concord Golf Club’s origins sprung from The Sydney Golf Club. We are proud to have held a large number of major events since 1908.

Check out the full list of our Sydney golf tournament history here. Become part of our story by learning about our prestigious membership here.

The Sydney Golf Club first met on August 2, 1893 and held their opening event on October 3 on land owned by Miss (later Dame) Eadith Walker at the corner of The Drive and Concord Road, Concord West.

By the end of 1893 a piece of land was acquired in the Bondi Sandhill’s between Old South Head Road and the ocean and they laid out 9 holes. This was extended to 18 holes, but subsequently located to the west of O’Sullivan Road at its present site where it is now known as Royal Sydney Golf Club. Both the Concord and Rose Bay courses were used by the Sydney Club until 1899 when it was decided to relinquish the Edith Walker links.

The local members then formed the Concord Golf Club at a meeting held at the home of Dr Tom Frizell sometime between July and September, 1898. David Kirkaldie was elected the first President, Alex Orr the Hon. Secretary and John Muir the Treasurer. The first match was played on 29th July 1899 against the former Strathfield Golf Club.

The Clubhouse was ‘Daisy Cottage’ on George Street, Homebush, just behind the Arnott’s Biscuit Factory. A portion of the course was under lease by the owner to Pitt, Son and Badgery, stock salesmen, as resting paddocks for cattle consigned to the Sale Yards. At that time, the original Strathfield Golf Club was situated on the Boulevarde near Liverpool Road and with the demand for building sites in the district, their executive met with their counterparts from Concord at Thorpe’s Hotel (the present Strathfield Hotel).

They agreed to combine and form the Concord Golf Links Limited with the purpose of purchasing 114 acres, called police Paddock, at 50 pounds per acre from the Estate of the late Thomas Walker. This, with 30 acres leased from Miss Walker on Majors Bay, formed the nucleus of the present Course.

By 1907, a new men’s course of 6130 yards – opened. It was designed by legendary Scot -Dan Soutar. The Clubhouse as well as a 9 hole course of 2000 yards for the associate members and a separate associates clubhouse were fully operational.

Some course reconstruction took place in 1915 and additional land was acquired to consolidate the 18 hole golf course. In 1916 when the purchase of the land was finalised some restructuring resulted in the closure of the ladies course and the sale of building blocks fronting Correy Avenue.

Dan Soutar was again commissioned to completely redesign the course in 1916 in response to the new boundaries of the Golf Club following the acquisition of the additional 22 acres from Dame Eadith Walker. When the course re-opened in 2016 the new men’s course measured some 6,200 yards.

World War II saw some of the course occupied by an anti-aircraft unit, strategically placed for the protection of Mortlake Gas Works. A booster station was built for the gas works and this was subsequently used for many years by the Club as a machinery shed. Three dams have been constructed on the course and these provide a good water supply for the greens and fairways.

Over time all of the holes have been reconstructed and in 1996 the decision was taken to appoint a golf course architect, Ross Watson, to re-design the course. His recommendations were accepted by the committee and subsequently $1,400,000 was approved by Members to proceed with the complete reconstruction of all the greens, bunkers and fairways and the reshaping of the dam on the 15th tee.

Under the direction of the Captain and the Greens Committee, our Course Superintendent, Mark Parker, commenced operations with course designer Ross Watson and shaper Graham Lindemann in November 1996. In 1999 as part of the Centenary Year the members approved plans for a major refurbishment of the old Clubhouse. Commencing just prior to the Olympic Games and completed just in time for the ANZ Championship the new building has been modernised but still retains the character of yesteryear. by Tom Breaden, Club Historian.

Many major events have been held here. June 1908, saw the staging of the open Bogey Competition for professionals in NSW. Tom Popplewell won the event with 84 – 5 nett 79, Don Souter won the gross with 80 and Open Bogey was won by Victor East 5 up. Other competitors were Fred Popplewell, Carnegie Clark and Charlie Campbell. Other competitions include the NSW Close Championship of 1934 won by Vic Richardson, in 1939 by Norman von Nida, in 1949 by Eric Cremin and in 1956 by our own Frank Phillips. The event was changed to the NSW Open Championship in 1958 and was won here again by Frank Phillips in 1966, George Serhan in 1980, Greg Norman in 1983, Ian Stanley in 1985 and Greg Norman again in 1986 and 1988.

ENQUIRE ABOUT BECOMING A MEMBER TODAY 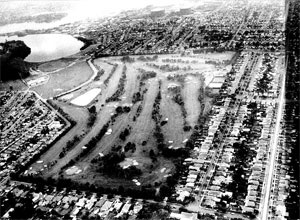